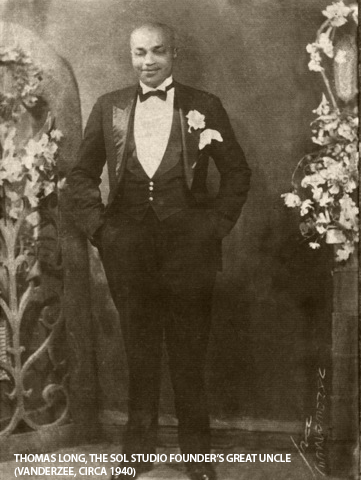 The Sol Studio celebrates the arts with exhibition spaces in New York City and Boca Raton, FL.  The dynamic creative spirit of the studio is ignited by the diverse urban culture of its flagship location in central Harlem.  As a neighbor to iconic venues, such as the legendary Apollo Theatre, Minton’s Playhouse, and The Studio Museum in Harlem, The Sol Studio celebrates the creativity of honored and emerging artists from around the world and engages the public with myriad creative expressions.

Since 2012, The Sol Studio has supported a range of content creators from artists and photographers to videographers and producers:

The initial inspiration for the The Sol Studio was the strong portrait photography tradition of Harlem as captured through the lens of James Van Der Zee during the Harlem Renaissance.