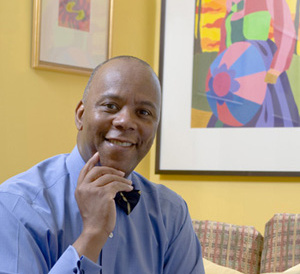 Richard Haynes is an African American artist who resides with his family in Portsmouth, New Hampshire. He was born in Charleston, South Carolina and was raised in New York City. He served four years in the United States Air Force during the Vietnam era as a Dental Technician and he received an MFA from Pratt Institute in 1979.

He is the Associate Director of Admissions for Diversity at the University of New Hampshire. His past and present Board afﬁliations include the U.S. Commission on Civil Rights/NH Advisory Committee, Portsmouth Black Heritage Trail/President, Currier Advisory Council, Currier Art Center Task Force, Ogunquit Museum of American Art, The Portsmouth Athenaeum,/Proprietor, Save the Pearl, Art-Speak City of Portsmouth Cultural Commission, Seacoast African American Cultural Center and McIntosh College Graphic Design and Photography.

Richard is an American visual storyteller, a cultural keeper and maker. He uses his art not only to make society aware of the invisible in this world but also to provoke unity. It reﬂects his own colorful and diverse life. Richard is a painter, photographer, educator, lecturer, professor, mentor, and a strong advocate for social justice.

Monkey Wrench | 31″ x 30″
1st quilt displayed as a signal for any slaves who planned to escape. It symbolized the time to collect tools needed on their journey north to freedom. Tools for constructing shelter, defending themselves and to determine direction. Along with food and a few coins, these tools were wrapped in a bandana bundle. They also needed mental tools to be cunning and alert. Know-ledge and ability to discern motives of strangers.

Wagon Wheel | 31″ x 30″
2nd quilt displayed wagons with hidden compartments. This was one of the primary means of transportation for escaping slaves. The message was to pack provisions for their journey as if they were packing a wagon. Since limited space and weight had to be considered for traveling, only essential supplies for survival needed to be packed.

Bear’s Paw | 30′ x 28 3/4″
3rd quilt directed runaways to follow the actual trail of a bear’s foot print. Animal foot prints indicated the best path, like a road map, through the mountains. It also led tired and hungry runaways to food and water.

Crossroads | 31″x 30″
4th quilt displayed the fugitive’s safety through the AppalachianMountains. They had to travel to the
“Crossroads”, or a city where they would ﬁnd protection and refuge. The main crossroads or terminal was Cleveland, Ohio. Four or ﬁve overland trails connected with Cleveland. Numerous water routes crossed into Canada through Lake Erie.

Log Cabin | 30″ x 29 1/4″
5th quilt indicated a speciﬁc log cabin in Cleveland that was a safe house. It may have directed runaways to build a log cabin to weather out winter and establish a permanent residency in a free area.!

Shoo-Fly | 29″x 28″
6th quilt represented an actual person that helped escaped slaves. It was the individual’s responsibility to secretly aid and harbor fugitives. Sometimes slaves hid out in churches or caves referred to as
cathedrals. Graveyards close to rivers or located on the outskirts of town were frequently hiding places.
Runaways secretly hid behind gravestones waiting for a lantern signal across town.

Bow Tie | 30”x 9″
7th quilt displayed a directive for runaways to dress in a formal manner. When slaves ﬁrst escaped they
wore distinguishable garments that eventually became tattered and torn along their journey. Free blacks would often meet them in a safe place (e.g. church) and give them clean clothing. In “Satin Bow Ties” runaways wouldn’t stand out among city folks. Towards the end of their journey, slaves could walk through town undetected to ships waiting to take them across the Great Lakes to Canada and freedom.!

Flying Geese | 31.5” x 29 3/4″
8th quilt displayed to them to take their direction, timing and behavior from migrating geese. Geese ﬂy north in the spring and it was the best time for slaves to escape. Geese also stop at water ways along their ﬂight in order to rest and eat. Since geese make loud honking noises, it was easy for runaways to follow their ﬂight pattern.

Drunkard’s Path | 29.5” x 28.5″
9th quilt showed that slaves were to move in a staggering fashion to elude any following slave hunters. They were to double back occasionally on their track to confuse slave catchers who were pursuing them.