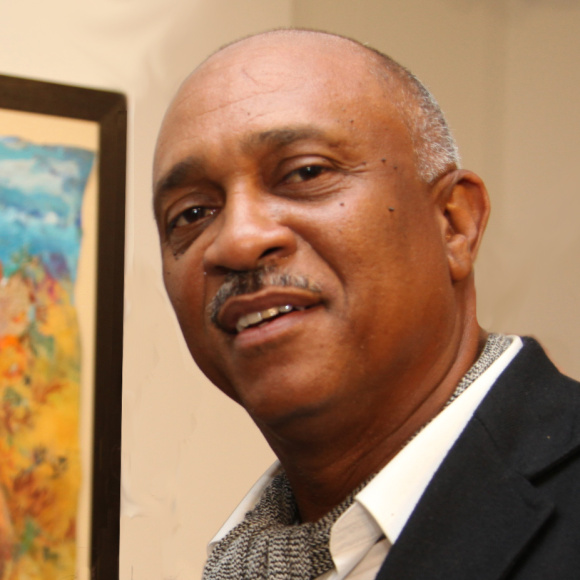 A native of West Palm Beach, Florida, who has a Fine Arts degree from the University of Maryland, combines the skillful use of acrylic paints and vigorous broad brush strokes to create a canvas pulsating with rhythm and movement. A jazz enthusiast, Sampson’s most exuberant paintings are the expansion of melodic ideas. He sees his figurative portrayals as attempts “to emote, to touch, to move you to the center of it all, to enable you to feel certain changes, like fleeting moments of memory.”

Sampson has completed a series of works portraying the life and play of the African-American men who starred in the Negro Baseball Leagues for nearly half a century. Through vibrant acrylics on canvas, vivid watercolors, and mixed media collages, Sampson recalls the play and excitement of such teams as the Homestead Grays, the Black Yankees and the Black Barons. Sampson’s work depicting a Pittsburgh Crawford player was published by the Smithsonian Institute in 1994. Sampson has also been featured in numerous national publications, such as Town & Country, Playbill, American Visions, and Black Enterprise magazines. He has been critically recognized in the Washington Post for his first retrospective at the University of Maryland in 1997, and also in the 2011 review about the “common threads “exhibit and recent works including the working man series. Sampson has been included in the International Review of African American Art comprehensive guide for collecting in 1998 and in 1997 he was commissioned by Absolut Vodka to create a painting for their award winning ad campaign.